Ehoza > Bitcoin > What is cryptoeconomics system?

Simply stated, Cryptoeconomics is a way to combine economic participants with cryptography.

More specifically, Cryptoeconomics is a field of computer science with the aim of solving the problem of coordinating participants in digital environments.

Through cryptography and economic incentives.

It’s important to pay attention to Cryptoeconomics when building a decentralized network.

What is the reason is a mechanism that provides a way to harmonize participant incentives without the need for a trusted third party.

Differences in Cryptoeconomics with traditional economics, in mechanism design, mix game theory, mathematics, and other methodologies from the economic field.

The main objective is to understand how to fund, design, develop, and facilitate decentralized network operations.

Or in other words is a discipline that studies many protocols that determine the production, consumption of goods, distribution, service consumption in a decentralized digital economy.

Start trade with TenkoFX broker ECN account.
One of forex Brokers with positive feedback of reviews from users and are regulated by IFSC Belize

Maybe among many people have thought that Bitcoin and other cryptocurrencies are wild.

There are no rules, no social norms, only greed, selfishness, and mining.

This is the reason why crypto is frightening for many people.

Actually, that fear should not happen.

Because, in reality, there are rules that govern decentralized peer-to-peer (p2p) networks such as Bitcoin.

The rules in this system use the code into the protocol and provide a framework for how network participants interact with each other.

For this reason, this system can actually help to create a system that is safe.

Trustworthy and valuable, as well as laws that are officially legally,  provide a framework for a better society.

Cryptoeconomics faces challenges about how this system can design rules and incentives so that the network remains secure and provides value for everyone.

Maybe at first, this will feel complicated with this decentralized peer to peer network.

But by understanding some of the basic crypto economics behind it, the complexity will be gone.

What problems have Cryptoeconomics solved?

Before Bitcoin came, many people assumed that it was impossible to create a peer-to-peer network by reaching consensus without significant vulnerability to attacks and errors.

Many people refer to it as a Common Byzantine Problem.

This is indeed a logical dilemma which shows that it is very important for all actors to reach an agreement, how, in a distributed system.

Then the arrival of Bitcoin, Satoshi Nakamoto introduced economic incentives for peer-to-peer networks to solve this problem.

Then the decentralized network relied on cryptography to reach consensus on the agreement.

Besides that most networks have included economic incentives.

This encourages network participants to behave in certain ways.

The synergy of cryptographic protocols with economic incentives enables a completely new network of decentralized crypto-economic systems that are resilient and secure.

The role of crypto-economics in Bitcoin mining

Bitcoin is a digital currency that creates a value transfer network that accurately verifies value transfers, and it is unchanged and uncensored.

This process is through mining, where miners who successfully validate the transaction block will get a bitcoin reward.

In the mining process, miners must be able to solve difficult mathematical problems based on cryptographic hash algorithms.

The hash is to bind each block one to the next block, which basically keeps a timestamped record of transactions that are approved in the blockchain.

Hash is also a computational puzzle, miners must solve this.

As for users, they can only spend in Bitcoin transactions if they use a private key, to make a valid digital signature

The technological rules related to mining are consistent with the security requirements of the Bitcoin network, including preventing malicious users from stealing.

What is cryptoeconomics system

The Bitcoin security model uses the principle of majority rule.

This allows the potential culprit to control the blockchain by taking control of most of the computing power of the network.

This is an attack that many people call a 51% attack.

By taking control they can prevent new transactions from getting confirmed or even reversing the transaction completely.

The Cryptoeconomics system is one of the reasons why Bitcoin works.

The notion of the inventor of Bitcoin applies assumptions to encourage certain incentives for various classes of network participants.

Effectiveness can provide security through this assumption.

Besides that it is also about how participants in the network react to certain economic incentives.

Without the hardness of the cryptographic protocol, there will be no secure account unit used to reward miners.

Without miners, there is no validity of the transaction history of the distributed ledgers.

Because through them all transactions can be confirmed unless there is a trusted third party that confirms.

In the Cryptoeconomics system, a mutually beneficial relationship between miners and the Bitcoin network provides trust.

Although that is not a guarantee the system will last forever.

Joel Monegro who has discovered and illustrated the flow of abstract values ​​through different participant classes in peer-to-peer economics, as shown in the figure below. 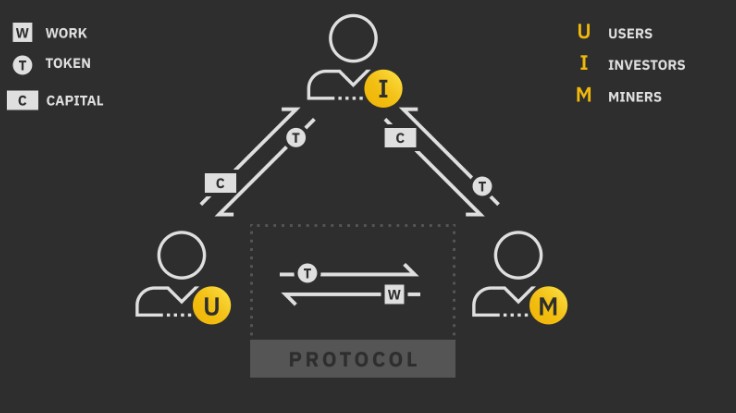 We can see that the rotation model represents a three-sided market between miners, users, and investors.

Each group exchanges values ​​with each other using rare Cryptoeconomics resources (tokens).

In the relationship between miners and users, miners will be compensated for their work through tokens used by users.

Then the network will standardize the consensus protocol in this process, while the Cryptoeconomics model will control how miners receive rewards

Miners want benefits that outweigh the costs caused by using them in building a network architecture that is supported by the distributed supply side.

However, this decentralized system has lower performance rather than with a centralized model.

The role of investors in this model is twofold:

Traders create liquidity for tokens so that miners can sell their tokens and cover operational costs, while holders utilize the network for growth by supporting token prices.

We can see the miner’s relationship with the trader working with a direct value stream.

But the miner’s relationship with the user works with an indirect value stream.

This means that all participants in this model circle in the economy depend on each other to achieve their economic goals.

Such an economic model creates a strong and secure network.

By adhering to the rules for an incentive it is more beneficial for individual participants than for evil activities, so the network will be stronger and safer.

The concept of Cryptoeconomics is indeed a new model whose emergence brings new hope for many people.

With the birth of Bitcoin, Cryptoeconomics was an important block to consider when designing a decentralized network.

Studying how the different roles in the Crypto economic model will be able to help how to analyze costs, incentives, and value flows for each group of participants.

Besides that, it can also help to think of relative strengths and identify potential centralization points.

Thus we can use to design models of governance and distribution of tokens that are more in balance.

By studying the Cryptoeconomics model for trials in applying it to the environment, future networks can be designed to be more efficient and sustainable.

This can be a hope that will result in a stronger decentralized economic ecosystem.

#What is qtum cryptocurrency?

What is market consolidation?