Bitcoin
379
No Comments
Share Tweet Share Share Pin it
Bitcoin holders of course still hope that in 2021 and the following year its value will increase, and maybe some are wondering, Can bitcoin reach 100k 2021?. Maybe this is a high expectation because the current Bitcoin price is around $47,199.63. However, it might happen, because global conditions are still uncertain, which can trigger large

Bitcoin holders of course still hope that in 2021 and the following year its value will increase, and maybe some are wondering, Can bitcoin reach 100k 2021?.

Maybe this is a high expectation because the current Bitcoin price is around $47,199.63. However, it might happen, because global conditions are still uncertain, which can trigger large investors to look for assets that are considered safe for hedging.

The coronavirus, which many claims continue to mutate, could cause global economic paralysis if this condition continues.

In early January, the price trend began to move in an uptrend condition. In February there was a retracement with a descending wave that was higher than the previous low.

Prices in February rose to reach $56k but declined again until early March in the range of $45k.

In March the price rebounded to a new high of around $61k. Price fluctuations in March are quite wavy. And early April prices started at around $59k.

Bitcoin price formed a new high in the $63k range in mid-April. But in the following month, a downward trend occurred in the price of Bitcoin.

June and July were bad months for Bitcoin price in 2021. The price plunged to a low of under $30k in mid-July.

After successfully passing the psychological price, Bitcoin seemed to bounce back up in August. Although it has not been able to form a new high, it is good enough to give hope to the next uptrend. 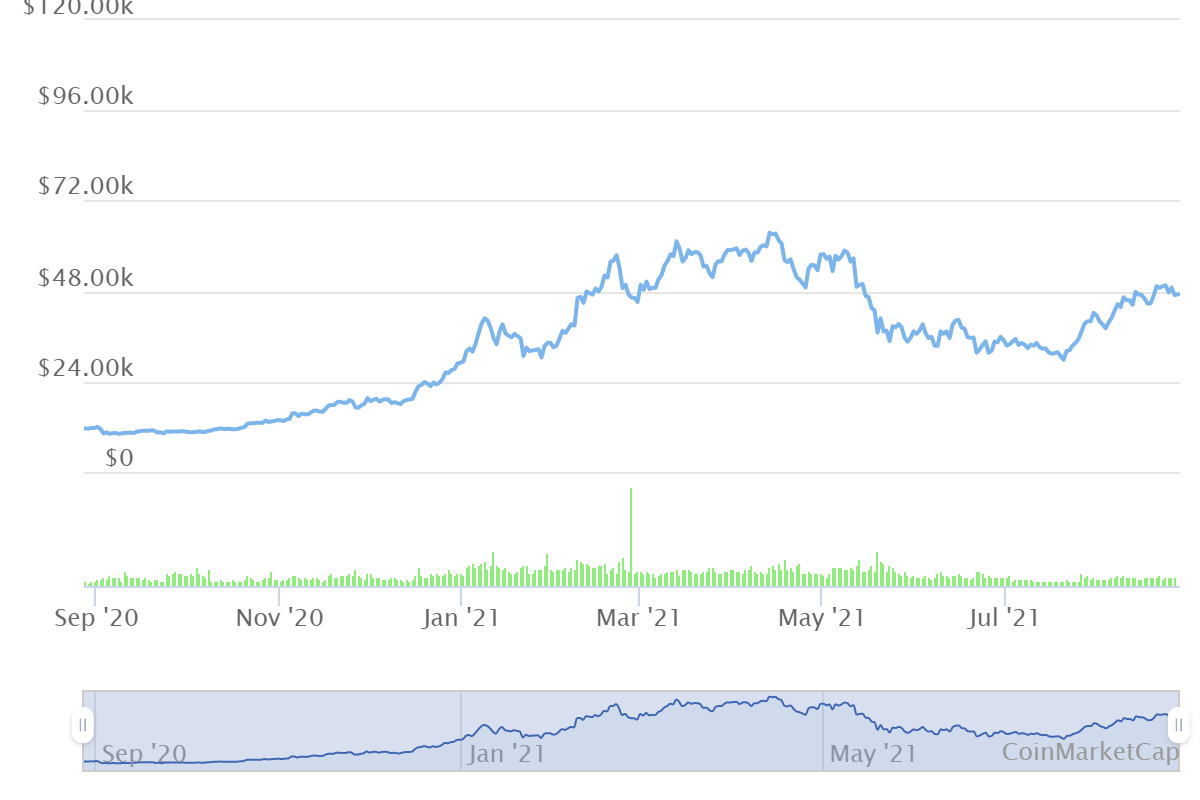 Bitcoin price history January 2021 starts at around $29k. Three days later the price managed to break above the $32k level.

But the next day the price dropped to around $30k on January 4th. Demand volume on January 5 managed to become the beginning of the continuation of the upward trend in January.

Prices significantly rose until January 8 to reach a high of $41k. This price range lasts until January 10. And quickly the price dropped to around $31k the day after on January 11th.

Price volatility is quite high in this wave. On January 12th the price went up to $35k again but fell again at $33k on January 13th.

Since this upward movement, there has been a break of the psychological level of $36k and managed to reach the range of $39k on January 15th.

The bearish blow started since this, the price dropped and formed a low at $30k on January 22nd. The day after the price went up again at $33k but didn’t manage to bring the price any higher.

Instead, the price drops below the $30k psychological level at $29k on January 27. Then another bullish wave-dominated until it finally hit a high of $38k on January 29th. 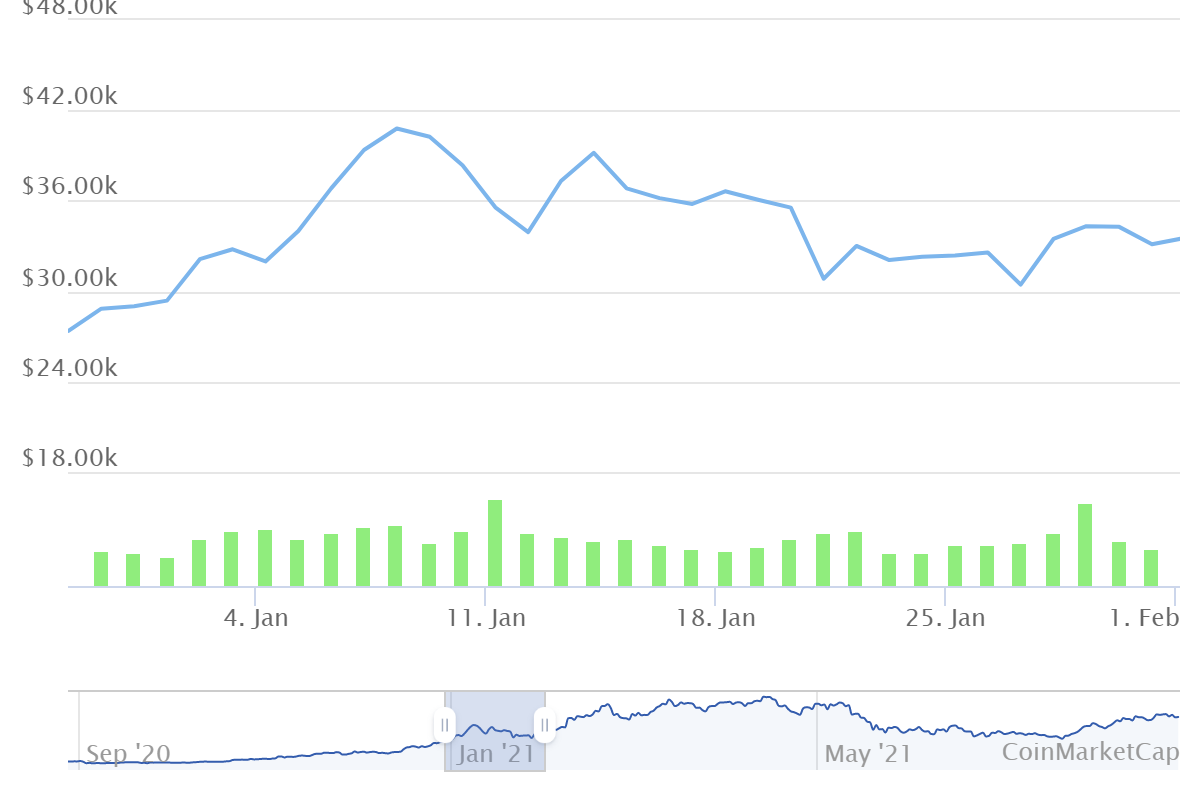 Subsequently, the price continued to rise gradually and reached a high of $57k on February 21st. Three days later the price dropped to around $48 until it finally dropped again at $45k at the end of February 2021. 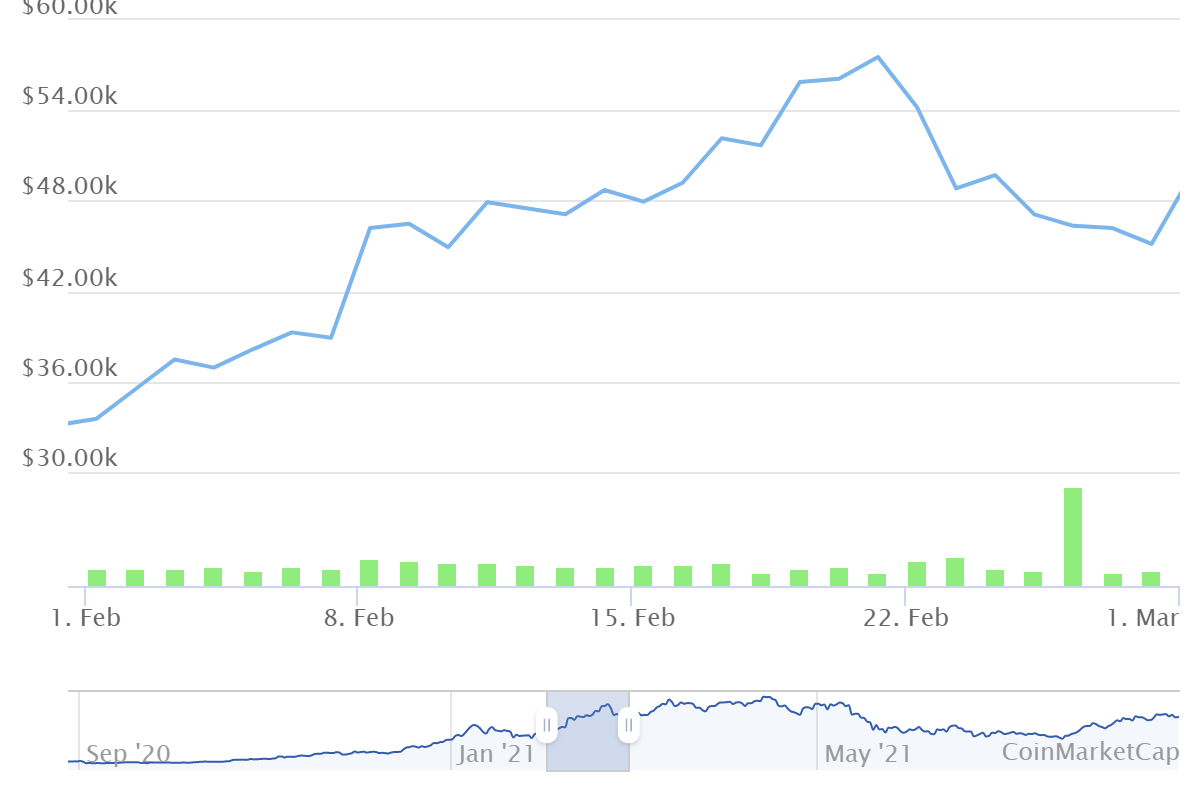 In early March the historical price of Bitcoin opened at around $49k. The day after it dropped to $48k, then rose again to $50k the next day. It only lasted a day and the price dropped again to the $48k range on March 4th to 6th.

The price was fairly stable for several days until finally dropping to the $54k range on March 22. Then the price dropped lower again at $51k on March 25th. At this point, the price then rose slowly until it reached its high on March 31 at $58k. 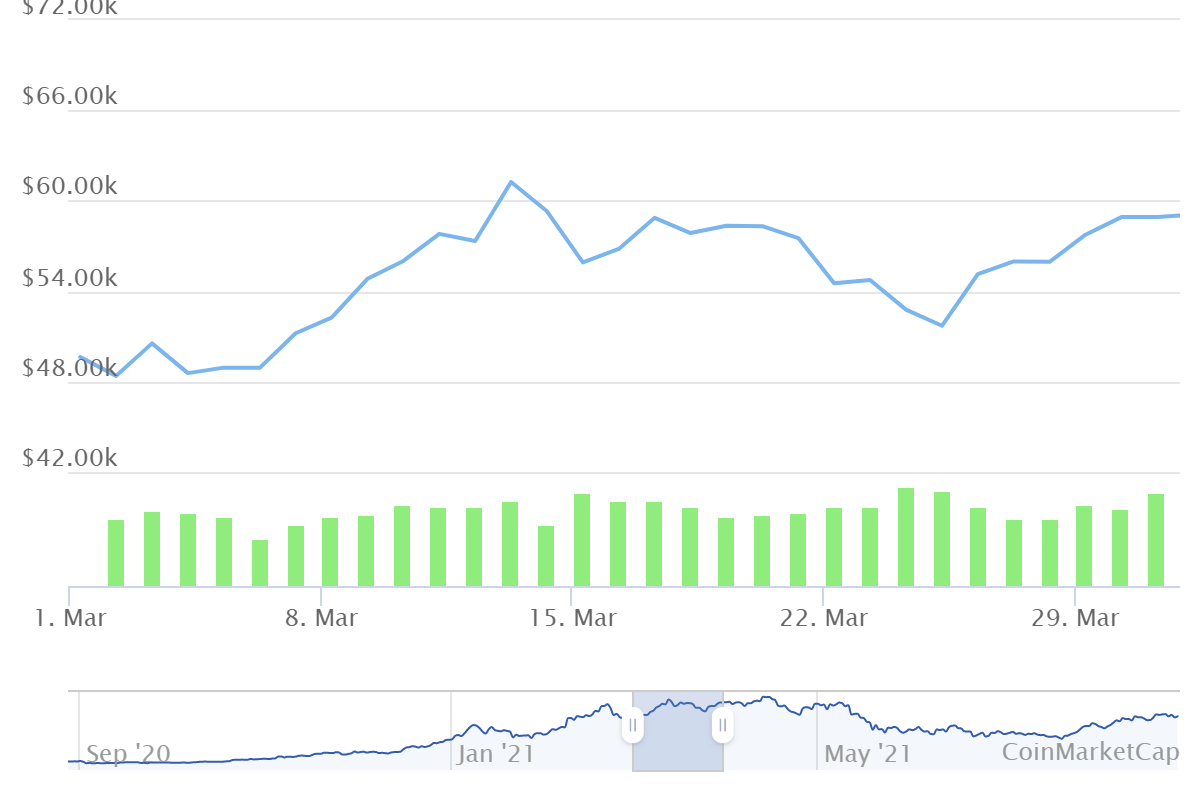 Bitcoin price history April 2021 begins at a price range of $59k. Prices dropped on April 3 to around $57k.

Two days later the price rose again to the $59k range and then dropped to the $56k price level on April 7th. Since then the price has tended to be bullish until it managed to hit a high of $64k on April 13 and 14.

At this point, the price then dropped and dropped even lower until it finally hit a new low of around $49k on April 25th. But then the price went up again until April 30 it reached a price range of $57k. 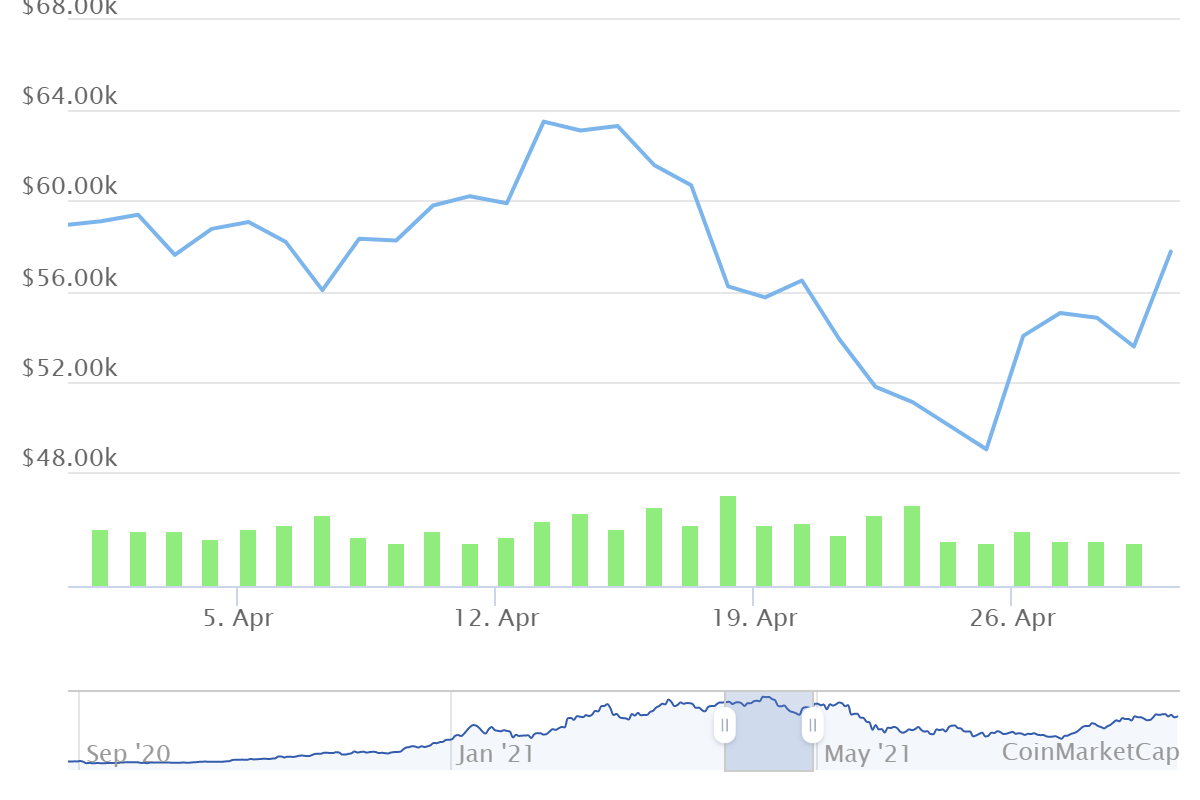 Bitcoin price history may open at around $57k. Four days later the price dropped to around $53k. Slowly the price rose to reach $58k on May 8.

At this point, the price then tends to be in a downward trend gradually until it reaches $34k on May 23. Since then the price has not been able to exceed the $39k range until the end of May closing in the $37k range. 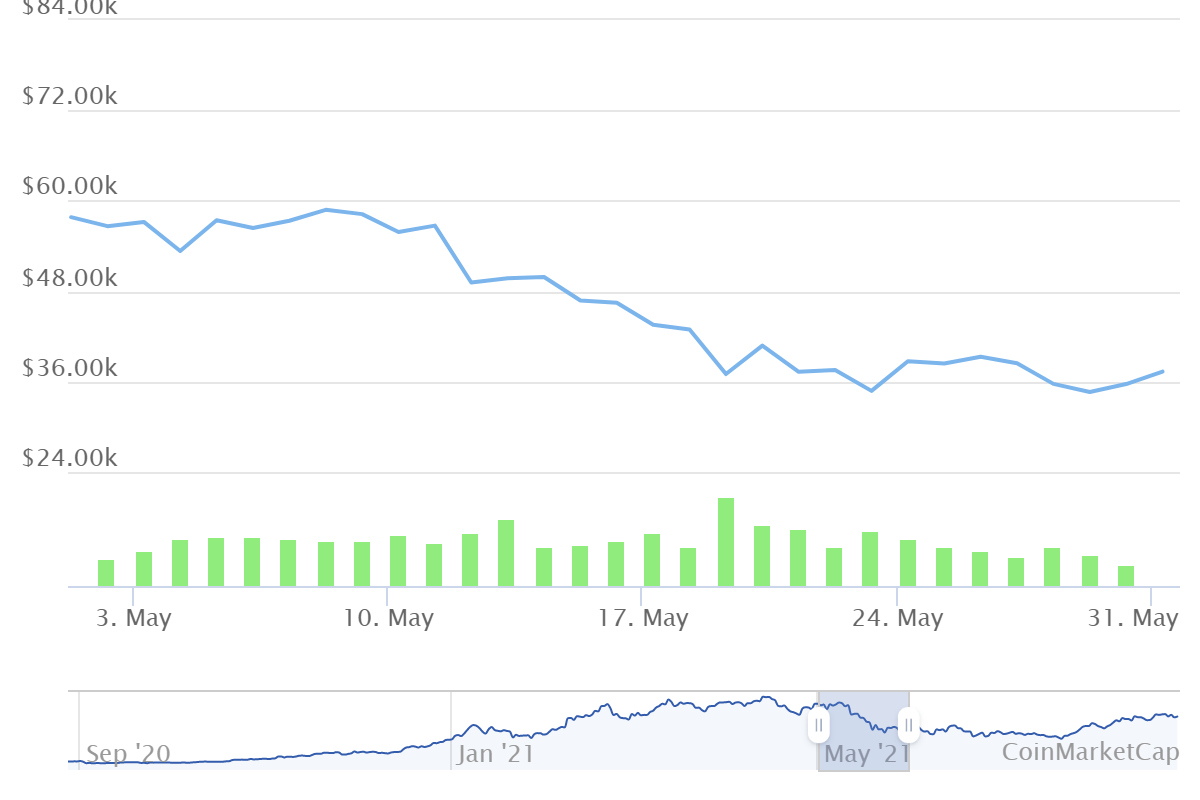 Bitcoin price history June 2021 opens at around $37k. Two days later the price rose to around $39k. But that position did not last long, as the price then dropped to $33k on June 8. The day after the price again rose to the point of $39k. Then it dropped again at $35k on June 12.

From this point, the price managed to climb to the $40k level on June 14th. But the price dropped again, lower, and hit a low of $31k on June 21. Until the end of June, the price did not make it past the $36k price range with a close at the $35k range. 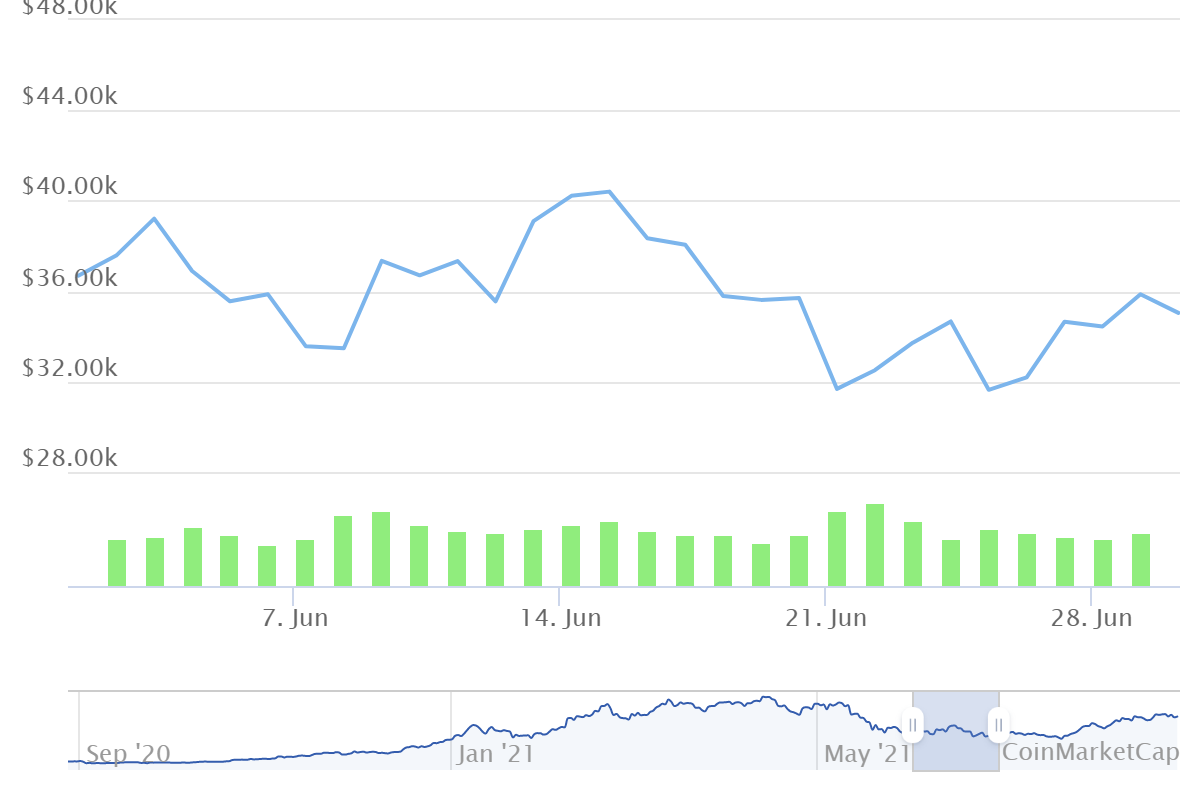 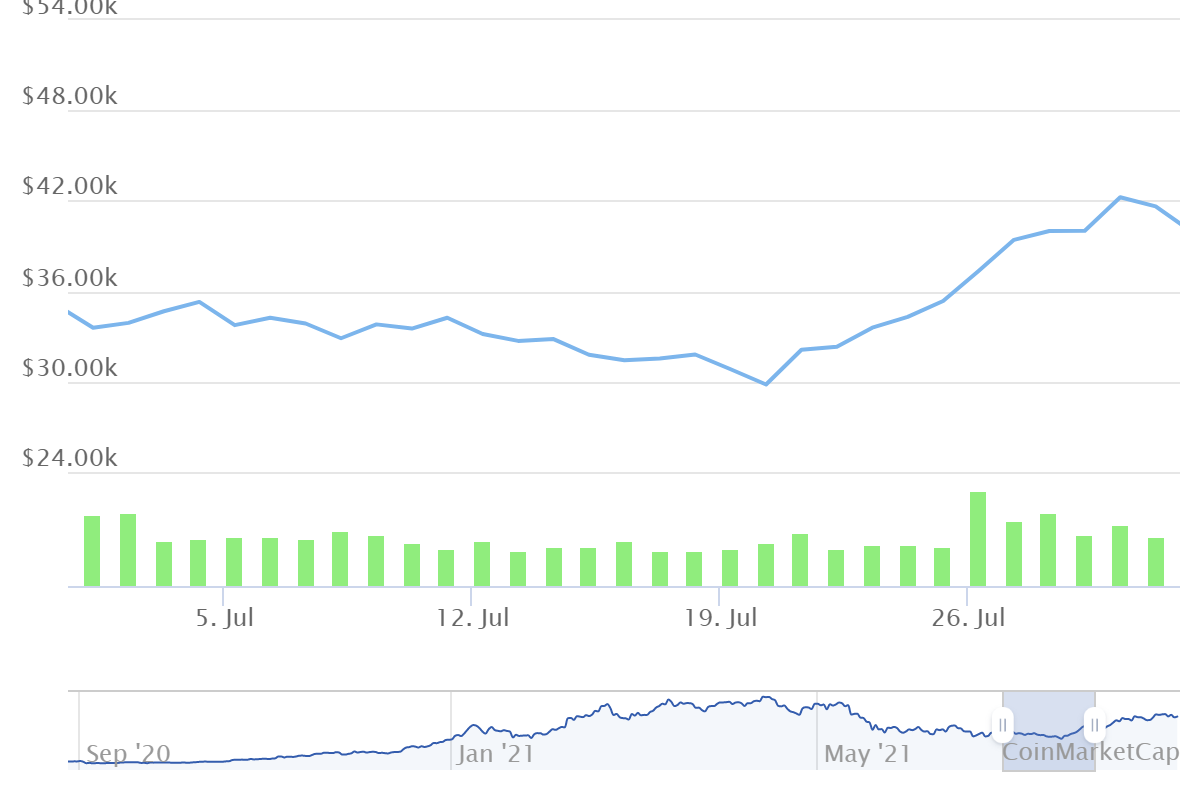 Bitcoin August 2021 opening price at around $39k. Three days later the price dropped to around $38k. From this point, the price then rose to a new high of $44k on August 7th. 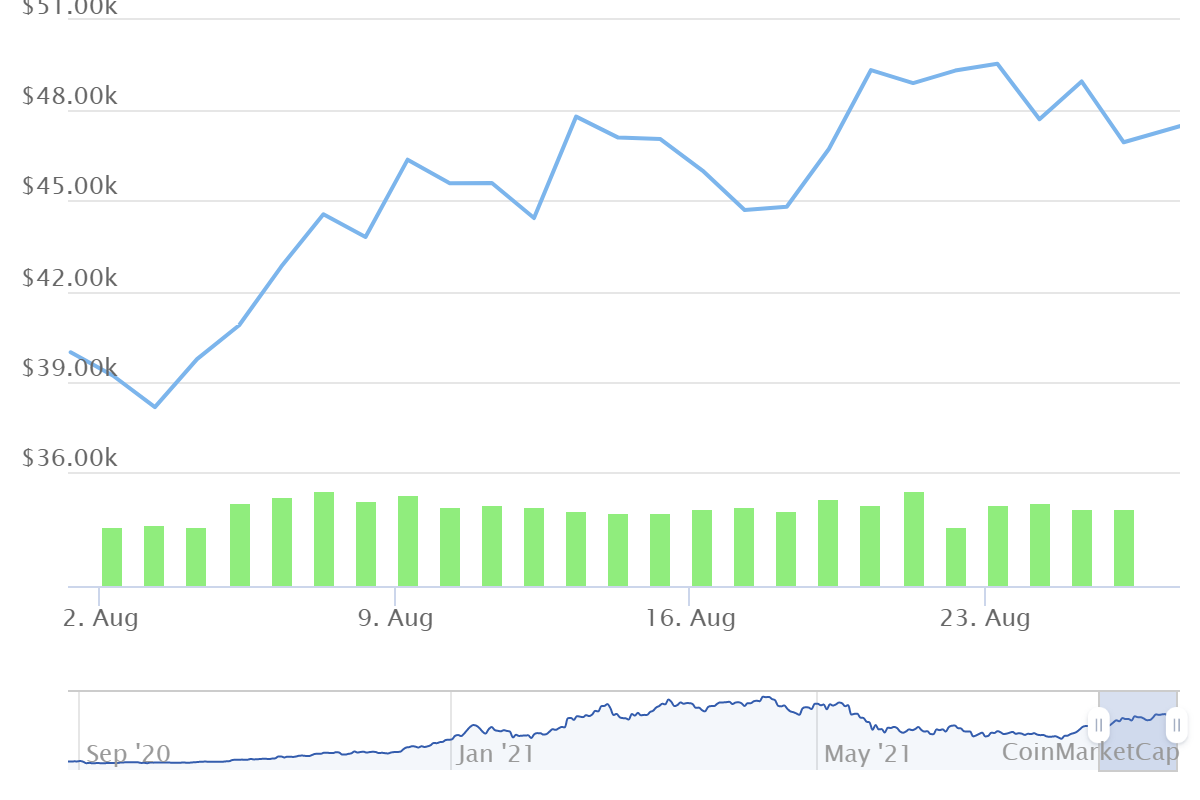 The increase in the price of Bitcoin was triggered by investors who increased demand for Bitcoin. As a result, Bitcoin rose to a high of $64k.

The price of Bitcoin can’t go any higher because of the threat from the Chinese government to ban financial institutions from transacting with cryptocurrencies.

China is the center of the world’s largest Bitcoin mining, due to government pressure, the price of Bitcoin also plummeted.

Bitcoin’s journey as a decentralized cryptocurrency in 2021 still faces several challenges in its quest for growth. Here is a summary of Bitcoin challenges in 2021 from several sources.

Countries are starting to tighten the cryptocurrency industry, from the US to China. China has closed crypto mining facilities and banned banking and financial companies from serving crypto transactions. Leading bitcoin trading company Binance was also recently banned from operating in the UK.

US Treasury Secretary Janet Yellen also recently issued a warning that cryptocurrencies could be used for illegal transactions. Last year, former US President Donald Trump proposed an anti-money-laundering bill under which people who make crypto transactions above $3,000 are required to have their identities checked.

Those who are optimistic about bitcoin (bitcoin bulls) consider bitcoin as “digital gold” where bitcoin investment can provide large profits in the midst of economic turbulence.

Ross Middleton, CFO of DeversiFi, said that volatility can attract investors because a small allocation of funds can get big profits. However, a steady movement of US$ 30,000-US$ 40,000 can serve as a price base, thereby attracting new capital to the crypto market.

Bitcoin mining activity wastes a huge amount of energy. Energy consumption goes up in direct proportion to the increase in the price of bitcoin.

The carbon footprint of electric machines is the reason Bitcoin detractors have found an excuse to discontinue the Bitcoin cryptocurrency.

Stablecoin is a type of coin whose valuation follows a real-world asset, such as the US dollar. Boston Federal Reserve President Eric Rosengren said tether, a Stablecoin that follows a 1:1 dollar exchange rate, is a threat to the financial system.

Crypto investors often use tether to buy crypto assets, but some investors are starting to worry that tether doesn’t have enough dollar reserves to justify tether’s exchange rate against the dollar.

Tether tokens reach US$60 billion in circulation, more than most US banks. Concerns have also arisen over allegations that tether was used to manipulate bitcoin prices.

Dogecoin is a meme coin that was originally just for fun. But suddenly it went up so fast that at one time, the valuation of this whole coin was more expensive than Ford and other big US companies. This is also a threat to Bitcoin prices in the future.

The Bitcoin price collapse in 2021 is mostly due to the influence of Chinese government policies.

Since the government again voiced a ban on the country’s financial institutions from dealing with cryptocurrencies, the impact of Bitcoin prices has fallen drastically.

The decline in the price of Bitcoin was followed by all other cryptocurrencies. In addition, there are other challenges regarding regulation. Where not all countries accept Bitcoin officially.

Besides these reasons in the community, not everyone agrees with Bitcoin as a global payment because it is considered as speculation due to its fluctuating value.

Those detractors often complain about environmental pollution due to Bitcoin mining which leaves a carbon footprint that is not good for the environment.

On the other hand, the Bitcoin bubble may repeat its history again. The Bitcoin price increase event before 2017 quickly reached its highest point until finally the price dropped suddenly, was a burst bubble event that occurred in Bitcoin.

Forbes senior contributor Billy Bambrough writing if  Lyn Alden as investment strategies predicts Bitcoin prices could jump to $100k in 2021. The current price of close to $50k is a good indication of Bitcoin’s future price.

Another analyst from Pantera Capital founder Dan Morehead believes that in the next ten years the price of Bitcoin could reach $700k.

Citing to Forbes, according to Citibank analysts, the price of Bitcoin could skyrocket to US$318,000 in December 2021. This prediction was leaked to the public via social media Twitter. In a note, to consumers, the analyst calls Bitcoin the ’21st-century gold’.

The note stated that one of the reasons for the price increase was Bitcoin’s growing reputation as digital gold and the many central banks discussing currency digitization.

Bitcoin is also expected to benefit from changes in the monetary and fiscal policies of a number of countries that could devalue traditional currencies.

Will the bitcoin price increase in 2021?

Taken from Forbes, the report states that a panel of cryptocurrency experts shared their comments that in some countries it will give leverage to Bitcoin as the primary currency.

Starting with El Salvador which has become the first country to legally adopt Bitcoin as an official currency. This means that people can spend Bitcoin to buy daily necessities.

The panel of cryptocurrency experts also predicts that Bitcoin will overtake the Dollar in 2050. And predict that by the end of December bitcoin price will reach $66k.

Bitcoin optimism can reach $100k into articles that are widely written on popular sites such as Forbes, Fortune, Nasdaq, and so on.

Experts believe that Bitcoin is still under regulatory scrutiny, and has been heavily criticized for environmental pollution problems due to Bitcoin mining’s carbon footprint.

But the future of Bitcoin is still very much open to becoming the primary currency that addresses the problem of low-cost global remittances.

What is AMP token?