Ehoza > Business > What is digital economy in malaysia?

Business Technology
223
6 Comments
Share Tweet Share Share Pin it
What is digital economy in Malaysia? According to Wikipedia that the digital economy refers to the economy using digital computing technology. Or on the other hand to do business through internet-based markets and the World Wide Web. The digital economy also refers to be the Internet Economy, the New Economy, or the Web Economy. World

Or on the other hand to do business through internet-based markets and the World Wide Web.

The digital economy also refers to be the Internet Economy, the New Economy, or the Web Economy.

World civilization from time to time is always changing, and one of the fundamental drivers is digital transformation.

This replaces traditional methods that are considered slower less efficient with time.

Digital transformation is to use the latest technology to do better.

Whether we realize it or not the global economy is undergoing digital transformation too, and it is happening at breakneck speed.

So what exactly is this digital economy?

The digital economy is all economic activity by utilizing internet connections every day in conducting business and interacting with people, devices, data, and processes.

While the foundation of the digital economy is the speed of connectivity.

This means that from the Internet, cellular technology, and the internet of things (IoT) have increased the linkages of people, organizations, and machines

Start trade with TenkoFX broker. One of the forex Brokers with positive feedback of reviews from users and are regulated by IFSC Belize

The digital economy in Malaysia

The development of the digital economy has also brought a new era in economic growth in Malaysia.

Typically Digital Economy in Malaysia refers to the way of trade and communication of the private and public sectors.

By adopting and utilizing digital technology facilitating services to the public to deliver goods and services.

Also with the goal of fulfilling other core functions to increase productivity, income.

It is about the digital economic growth of USD 3 trillion.

It is important for Malaysia to be able to lead in key areas such as digital adoption, digital entrepreneurship, and innovation.

Adopting a digital economy can make it easier for everyone to connect digitally which can be accessed anywhere and anytime.

By maximizing the digital economy it will benefit from technological advancements to increase the speed of business and government services to improve a better quality of life.

Based on a speech from Malaysia’s finance minister, it was also written on the website https://www.treasury.gov.my/ that in 2018, Malaysia had an internet penetration rate of 85.7%.

Malaysia is still trying to always improve its digital infrastructure to provide fast and reliable internet services, with the aim of making wider digital economic development.

For further development, Malaysia has launched the National National Fiberisation and Connectivity Plan (NFCP) in order to accelerate infrastructure development.

This policy is to increase competitiveness and reduce costs but can provide faster internet speeds for the population.

With the availability of high-quality internet at affordable prices, it is possible to accelerate the expansion of the digital economy in Malaysia.

With an average annual growth of 9% in the Malaysian digital economy, it is faster than Malaysia’s overall GDP growth.

Even the International Data Corporation (IDC) estimates that more than 21% of Malaysia’s GDP can be achieved by 2020 from the current 18%.

The role of the government is investing in the digital economic sector is very large to be part of this rapid growth.

The Malaysian government has also modernized and digitized service systems and processes in various institutions and departments.

This has improved efficient services, easier access to information, and wider and faster service coverage.

For example the issuance of a Malaysian passport that previously took one day but now can be completed within one hour.

Another example is vehicle tax and road tax can be done online and can be completed with a shorter time.

The successful digitalization of Malaysia contributed to the high scores in the World Bank’s Doing Business Report.

With placed Malaysia at number 15 among 190 economies in terms of ease of doing business.

The government is driving the digitalization of the private sector

Besides digitizing government services, Malaysia is also a driver of digitalization in the private sector.

This can be proven in the 2019 government budget with a budget of billions of ringgit.

Through the provision of grants and financing guarantee programs for Malaysian companies to encourage the digital economy of Malaysia.

Small and Medium Enterprises (SMEs) especially those that have contributed 37% of GDP in 2017 really need support from the Government.

Because they are not a big company and do not have human resources who understand the digital economy.

The step of digitizing SMEs is important in Malaysia because 9 out of 10 business companies in Malaysia are SMEs.

Where the role of SMEs provides two-thirds of the total employment in the Malaysian economy.

E-Commerce as a driver of Malaysia’s digital economy

In Malaysia there are almost 200 fintech companies serving the Malaysian market, this indicates that fintech growth is quite rapid.

The company consists of e-payment and cellphone wallet providers, product and insurance aggregators, e-Know Your Customer (e-KNY) solutions, and others.

Some fintech companies that can be the pride of Malaysia are Grab, Iflix, and Fave.

With this new service can encourage further payment cashless in Malaysia in support of the E-Tunai Rakyat 2020 initiative from the Ministry of Finance.

From Thestar news has reported, Through Grabpay, this rewards Malaysians with additional savings of up to RM3,000 with the “Siapa Cepat, Banyak Dapat” campaign, it:s term has to mean Who’s Fast, Get Lots.

You can get more information about this campaign on Grab official website. 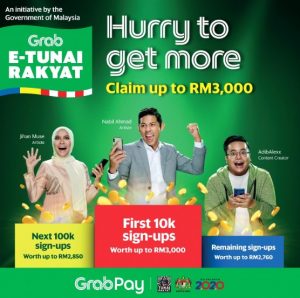 The growth of electronic-based payment methods has increased significantly over the past year in Malaysia.

Data obtained from State Bank Statistics shows that the value of transactions for electronic money in January to October 2019 has jumped to RM13.9bil, with a transaction volume of 1.72 billion.

This increased and exceeded RM11 billion compared to 2018.

By emphasizing payment cashless can help small entrepreneurs in the SME sector and also provide benefits to consumers.

Besides this, the use of cashless can save Malaysia up to 1% of the country’s GDP (estimated at RM13bil) due to cash-based transaction costs.

Every day, everything is E-wallet in Malaysia

The development of the Grab service and network environment, which became a pioneer of Malaysia’s digital economy, makes Grabpay a payment method that is smooth and comfortable for daily needs.

Grabpay wallet users can make payments ranging from rides and food on demand and delivery to online and offline transactions and even mobile prepaid top-ups.

For further development, GrabPay partnered with PayNet and became the first wallet in the country to adopt DuitNow QR.

Using this technology will be able to make payments from any bank that becomes an e-wallet network or mobile application, and users only need to display one QR Code to receive payment.

Challenges in the digital economy Malaysia

The digitalization of the economy does provide convenience and speed of service in the economy and government.

But with the growth of the digital economy also presents its own challenges that must also become attention from the government.

These challenges include being able to disrupt the existing economy.

For example, automation can cause some companies to lose out in the competition.

So the role of the government is to ensure that these companies get help to make the transition to a new economic order.

And the challenge that can disrupt economic stability is the reduction in employment that causes new unemployment.

In some world economic forums, it is estimated that around 75 million jobs can shift globally because of the division of labor between people and machines.

And there are an estimated 133 million new jobs that might emerge to adjust the division of labor in the new digital economy between humans, machines, and algorithms by 2022.

And one way to overcome this challenge is to train those who are losers to be able to fill new jobs to adjust to the new digital economic era.

Even this method does not mean without obstacles, the government itself is unable to finance because of limited infrastructure and resources without any partnership with the private sector.

Some opinions state that with the new digital economic technology it will be a consequence of creative destruction.

But in this case, the Malaysian government said it would reject creative destruction as a form of digital challenge.

And to overcome this the government will be more gentle to make policies.

That supports the creative economy can be balanced with the digital economy.

In other words that the digital economy must contribute to the old economy.

So that it does not become a mass shock because of the emergence of new unemployment.

Besides the challenge of unemployment is also about taxation.

The development of the Malaysian digital economy is very rapid and partly tax-free.

This is in sharp contrast to the old economic model which is taxed.

So in 2020, the Malaysian government will impose a digital tax for the first time.

1. What is the digital economy in Malaysia?

The digital economy in Malaysia is galvanizing the Malaysian economy digitally.

2. How does the digital economy work?

The way the digital economy works is to use digital information and knowledge as the main factors of production.

3. What is MSC Malaysia status?

The status of MSC Malaysia is a statement from the Malaysian Government through Multimedia Development Corporation (MDeC).

For the business sector facilitated by ICT.

While ICTs are developing multimedia technology to produce and improve their products and services.

Malaysia’s digital economy has given birth to world-class companies that can compete in other countries.

Grab for example, through the Grabike application, has entered the Indonesian market.

This has indeed become a competitor with the local company Gojek in online motorcycle taxi services.

But this shows that Malaysia has developed into a country with advanced digital economic growth in Southeast Asia.

This is proof that the digital economy can penetrate a wider marketplace.