Ehoza > Blockchain > Are blockchains bad for the environment?

Blockchain
600
No Comments
Share Tweet Share Share Pin it
The emergence of blockchain technology is often hotly debated because blockchain is bad for the environment. Like Elon Musk who in March 2021 decided to accept Bitcoin for payment for his products. But two months later, he reverse the decision on the grounds that a good product must be environmentally friendly. Blockchain is not environmentally

The emergence of blockchain technology is often hotly debated because blockchain is bad for the environment.

Like Elon Musk who in March 2021 decided to accept Bitcoin for payment for his products. But two months later, he reverse the decision on the grounds that a good product must be environmentally friendly.

Blockchain is not environmentally friendly, in contrast to Tesla’s products, which replace fuel oil with batteries to run vehicles consider a more friendly environment.

Blockchain technology definition according to The European Union Agency for Network and Information Security (ENISA) is a ledger, in which peer-to-peer transactions are recorded on the network.

The data is connected in a data block structure. Its decentralized nature does not require a trusted centralized authority, however, it uses cryptography for transaction integrity.

This means that in blockchain technology there is no intermediary to validate a transaction, and transactions are protected by encryption with cryptography.

In contrast to traditional banks which are intermediaries and regulate all banking transactions. The blockchain ledger acts as a substitute for the role of the bank in a financial transaction.

A blockchain is a place for transaction data in a decentralized network, where users are responsible for all transactions. Both storage, update, and verify transactions.

Even though the blockchain ledger is encrypted, people keep track of the transactions that are visible.

Blockchain here places and synchronizes data between interconnected blocks. Each block represents a transaction and records and is linked to the previous block. That’s why it’s called a blockchain.

Some of the advantages of blockchain technology, when compared to traditional systems, are, that the data in the blockchain is immutable, provides better transparency, enhanced security, increases speed, and lowers costs.

Blockchain can increase security, by recording end-to-end transactions with encryption that allows for preventing unauthorized activities. The information distributed in the network prevents hackers who have to be more complex to be able to see the data.

Blockchain technology can be applied not only in the financial industry but also in various other industries, for example, pharmaceuticals, government, and food supply.

Although blockchain offers advantages in terms of transparency as well as transaction fees and speed. However, this technology is still quite new and has its drawbacks.

Some argue that blockchain is not really secure, requires a lot of energy, and is not a very large distributed computing system. Mining isn’t really network-safe, and it’s neither perpetual nor immutable.

Another issue is scalability because blockchain is indestructible. Another drawback is that blockchain has high complexity and is considered less efficient.

How does Bitcoin contribute to climate change?

Recently, the issue of climate change has become an important topic internationally. In blockchain technology, one of the causes of its contribution to climate change is the carbon footprint left by Bitcoin mining.

In the beginning, the price of Bitcoin was only $1 in a few years turning to a price level of $40,000 and even to a price level of $65,000 causing many people to try to invest in blockchain. Among them is to build a Bitcoin mining machine which requires a large amount of electrical energy to run the machine all day long.

Because miners compete with each other using supercomputers and require large amounts of electricity, their contribution to climate change is a high carbon footprint because most sources of electrical energy use coal.

This issue becomes important for miners, so they must try to develop renewable sources of electricity.

Blockchain evangelists say that the technology is immutable, which defines a permanent ledger, and recorded transactions cannot be changed.

Technically, no one can change the database in the Blockchain. No one can manipulate the data already on the blockchain.

Thus, technically the block that has been formed is indelible and is connected to the next block which will record new transactions.

The reason blockchain is immutable is the combination of validation in the blockchain hashing process and cryptography that makes it immutable.

Can blockchain be destroyed?

In theory, blockchain is indestructible, and resistant to hackers due to its decentralized nature where the data stored in the blockchain is spread across all nodes in the network. So it is impossible for hackers to hack the blockchain, and that is a very difficult job.

But why is there a cryptocurrency hack that wipes out millions of dollars?

The blockchain itself uses encryption for security so that without permission it cannot read the stored data even though it can download it.

But maybe in the future, this blockchain technology can be destroyed by the presence of new, more powerful technologies. At this time, for example, the development of the Quantum computer is also being massively hot news, which allows at some stage to open the encryption in blockchain technology.

Environmental issues related to blockchain, this is very close to the case with Bitcoin mining which is accused of being the cause of the bad impact on the environment.

The Proof of Work consensus carried by Bitcoin causes Bitcoin mining to require a large amount of electrical energy, even exceeding the electricity demand in one country.

In 2022, refers to Cambridge university, the largest mining activity occurred in the United States controlling 42.7% of mining activities globally, shifting China’s position from the previous year.

Why is blockchain accused of being bad for the environment? The underlying reason is the carbon footprint left in fossil energy sources in fuels for power generation.

Although it is very complicated to calculate the carbon footprint of Bitcoin mining activities. According to Diginomist, Bitcoin mining is responsible for 114 million tons of carbon dioxide per year, as per the data released in May 2022.

The environmental impact of blockchain on the environment is mainly from mining Bitcoin. Which is the first and top cryptocurrency.

What is the future blockchain?

The main problem in blockchain technology is the e-waste and carbon footprint. It is mainly taken up by the Bitcoin blockchain.

At this time the Proof of Stake consensus is considered more energy efficient and does not leave a lot of electronic waste.

If both Bitcoin and Ethereum could switch to using the Proof of Stake consensus concept. It might avoid accusations of adverse effects on the environment.

Or if you still maintain proof of work, then look for alternative sources of electricity that are environmentally friendly that don’t leave a carbon footprint.

Can blockchain work without the internet?

Blockchain is spread across all nodes in the network which in validating transactions requires an internet connection. So it is impossible for blockchain to run without the internet.

Does blockchain use a lot of energy? 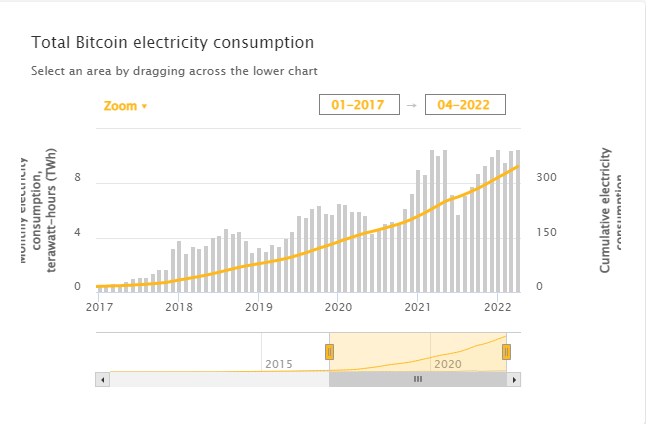 Although currently blockchain still consumes a large amount of electrical energy. Blockchain development has arrived at a solution for energy consumption and scalability. With the emergence of a new blockchain with a Proof of Stake. This type of consensus comes to be a Bitcoin blockchain solution that requires large energy.

Pros and cons of blockchain technology

Blockchain technology today may be accused of being bad for the environment. But the growth of blockchain has not stopped there.

The emergence of new blockchains that offer solutions from their predecessors.  Provides an opportunity for blockchain technology to continue to grow even though the government may try to stop its progress.

Because blockchain may be considered financially destabilizing and does not represent a safe currency.

In addition, the issue of climate change is currently a hot topic in the world. In its efforts to save the earth due to the use of energy that destroys the environment.

Note: This article is only for information and can’t be considered investment advice or solicitation investment. Forex, crypto, and CFD are risky, each investor has their own responsibility for their investment.

What is a VPS forex?