Blockchain
145
4 Comments
Share Tweet Share Share Pin it
Maybe many people already know about bitcoin, but not everyone understands the underlying blockchain technology, this is the Introduction to blockchain technology. The development of technology in the 21st century is very rapid, in the world of financial technology. One that is in the spotlight and is the subject of discussion at various seminars, forums,

The development of technology in the 21st century is very rapid, in the world of financial technology.

One that is in the spotlight and is the subject of discussion at various seminars, forums, etc.

It is about blockchain technology.

Blockchain is for recording digital currency transactions such as Bitcoin, Ethereum, Litecoin and the like.

Blockchain does not use a third party in a data exchange process.

That is, in this case, occurs in the transaction process.

The Blockchain system does not use a third party as an intermediary.

But it uses a lot of interconnected computers spread across the network itself.

This will make it difficult for irresponsible people to enter the system and it will be difficult to hack into the system.

Trading crypto with TenkoFX. Start trade with TenkoFX broker.
One of forex Brokers with positive feedback of reviews from users and are regulated by IFSC Belize

What is meant by Blockchain technology?

The definition of a blockchain in Introduction to blockchain technology is initially a block chain.

It contains a list of records arranged in blocks, using cryptography as a link.

It’s referring to an open ledger that able to record transactions of two parties efficiently and in a verifiable and immutable way.

Blockchain is an intelligent discovery of the idea of ​​a person or group of people known by the pseudonym Satoshi Nakamoto.

And since then, it has developed into something bigger.

It is a data structure that stores records of transactional by ensuring transparency, security,  and decentralization.

Or in another sense, it is a chain or store record in the form of blocks controlled by a single authority.

This is a ledger book that is truly open to anyone and everyone on the network.

After the information has been stored in the blockchain, it will be difficult to change, so it is immutable.

To prove the authenticity of this transaction using a digital signature.

By using encryption and digital signatures, the data stored on the blockchain is not damaged and immutable.

An Introduction to blockchain technology there is a consensus term, this means allowing all participants in the network to reach an agreement.

All data that has been stored on the blockchain is digitally recorded and has a public history available for all network participants.

In this way, any fraudulent activity or transaction duplication will be eliminated without the need for a third party.

What is Blockchain technology and how it works?

As the explanation above that Blockchain technology is a ledger with distribution openly.

Which ledger can safely record transactions without using a third party like a bank.

In distribution, usually, a peer-to-peer network is the one that manages the blockchain.

These networks work together to solve complex mathematical problems to validate new blocks.

To understand how blockchain works, we first need to know that there are three main properties of Blockchain Technology.

In a centralized service, all data and any information must go through a particular entity as a third party.

For example, a bank, when you deposit your money in a bank, so if you want to make a withdrawal, you need to go to the bank that is the service center, this is an example of a centralized service. 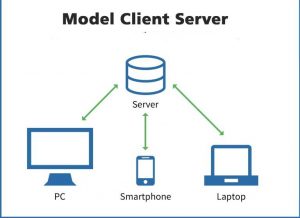 The existing centralized system has treated us very well for years, however, they have some weaknesses.

First and most crucial is that because it is centralized, all data is stored in one place.

This has the potential to make it an easy target for hackers.

Secondly, if there is a centralized system repair or update then we have to go through a software upgrade, it will stop the whole system while the process is running.

In a decentralized system, information is not stored by a single entity, so everyone on the network has information.

In a decentralized network, if you want to do transactions with your friends, you can do it directly without going through a third party.

That is the basic concept of the main ideology behind Bitcoin.

You can send your money to anyone all around the world that you want without having to go through a bank.

Blockchain technology gives you privacy, but some say it’s transparent.

Both are true because a person’s identity is hidden through complex cryptography.

But everyone can see their public address.

This public address for example if you want to find someone’s transaction history.

So, the person’s real identity is secure, but you can still see all transactions made by their public address.

Nothing in the history of the financial system has this level of transparency.

So if you have a company’s public address information, you will be able to track the transactions they have made, and this forces them to be honest with all stored transactions.

Immutable, in the context of the introduction to blockchain technology, means that once something has been added to a blockchain, it cannot be tampered with.

The reason why blockchain gets this property is that it has a “cryptographic hash” function.

Simply put, hashing means taking an input string of any length and giving an output of a fixed length.

In the context, transactions are taken as input and run through a hashing algorithm.

For example, take the example of SHA-256 (Secure Hashing Algorithm 256)

In the case of SHA-256, although your input is big or small, then the output will always have a fixed with 256-bit length.

This will be very helpful when we deal with large amounts of data and transactions.

Functions hash cryptography is a special class,  that has various properties making it ideal for cryptography.

There are certain properties that cryptographic hash functions must have in order to be considered safe.

Blockchain is a linked list that contains data and hash pointers that point to the previous block, thus creating a chain.

Blockchain is managed by a peer-to-peer network.

In this network, there is a collection of nodes that are connected to each other.

A node is an individual computer that accepts input and functions on it and provides output.

Blockchain uses a special type of network called a peer-to-peer network which partitions the entire workload among participants, all of whom share the same privilege, which is called “peer”.

There is no longer a central server, now there are several distributed and decentralized partners.

In a peer-to-peer system, there is no central authority, and therefore if one of the partners in the network goes out, we still have more partners to download.

Plus, this does not adhere to the idealistic standard of the central system, hence it is not susceptible to sensors.

Who Will Use the Blockchain?

An Introduction to blockchain technology, Blockchain has the potential to bypass intermediaries for this type of transaction.

Personal transaction data in the computation becomes accessible to the general public with the discovery of the Graphical User Interface (GUI), in the form of a desktop

Likewise, the most common GUI designed for blockchain is the so-called “wallet” application, which people use to buy things with Bitcoin, and store them together with another cryptocurrency.

Online transactions are closely related to the identity verification process.

It’s easy to imagine that the wallet application will change in the coming years to include other types of identity management.

Even though it sounds revolutionary, Blockchain is truly a mechanism to bring everyone to the highest level of accountability.

No more missed transactions, human or machine errors, or even exchanges that were not carried out with the agreement of the parties involved.

Whatever it is, the most important thing is that the Blockchain helps to guarantee the validity of a transaction by noting only the main register.

But a distributed register system that is all connected through a secure validation mechanism.

1. What is the purpose of Blockchain technology?

Blockchain Technology Objectives: The purpose of blockchain technology is to simplify the way transactions are carried out.

This allows users to utilize ledgers in a secure manner without the help of third parties and allows free cryptocurrency through a decentralized environment.

2. How do you explain Blockchain?

Blockchain is a database that is shared across computer networks.

After the record information is added to the chain, it is very difficult to change, while ensuring all copies of the database are the same, the network carries out constant checking.

3. Is Blockchain the future?

Forget Bitcoin, but Blockchain is the Future. All Cryptocurrency uses a distributed ledger technology known as a blockchain, a fast-growing blockchain technology for companies in various industries.

After that came another cryptocurrency that also used blockchain technology.

It is very possible that the growth of blockchain technology is utilized by many countries.

Because of its advantages, but it does not adopt the same digital currency.

Maybe they use the names of other digital currencies, to get a unique name for the country.

Before the Wuhan tragedy, China was the only country that was enthusiastic about developing blockchain technology and may have followed other countries.