What is the reason for this halving?. All cryptocurrency enthusiasts know that Bitcoin is a digital currency that is different from a flat currency.

It is created in a certain amount. Unlike flat money that will often print new banknotes if needed.

Weaknesses in the fiat money system are vulnerable to inflation. Because printing new money means increasing the supply of money and if the number of transactions remains, it can cause inflation.

Bitcoin itself was created only by 21 million Bitcoin and there will be no additions. And that number is expected to be depleted in 2040.

Because the amount is fixed then the possibility of inflation is very small but allows its value to increase.

Bitcoin halving is a way to control the circulation of Bitcoin by lowering the miner’s reward by half. Because there is only 21 million Bitcoin in the whole world, it needs a way for circulation to go according to plan.

The Bitcoin mining model is to adopt as gold mining. Gold is estimated to have a limited amount worldwide.

Gold mining is increasingly decreasing it will dig deeper into the earth deeper. And like that Bitcoin adopted Bitcoin halving by lowering the miner’s reward by half from before halving.

Bitcoin halving will continue to be done every 210000 blocks until finally, the miner’s reward becomes zero.

The number of Bitcoins circulating in the public will continue to grow to the maximum limit of 21 million BTC. Bitcoin halving has the aim of ensuring control of bitcoin supply. The rules in Bitcoin are designed to gradually decrease miner’s reward every four years.

This reward will be split by half on each bitcoin halving until the 21 million Bitcoin circulating on the market is reached. Thus, this system can ensure the value of Bitcoin continues to rise.

The theory in the graph below states that changes in the Supply level cause proportional changes in the value of Bitcoin. Then the reduction in the level of coins in circulation for Bitcoin must lead to a proportional reduction. If we assume in terms of simple demand and supply law, it clear that the price of Bitcoin will continue to rise after Bitcoin Halving occurs. 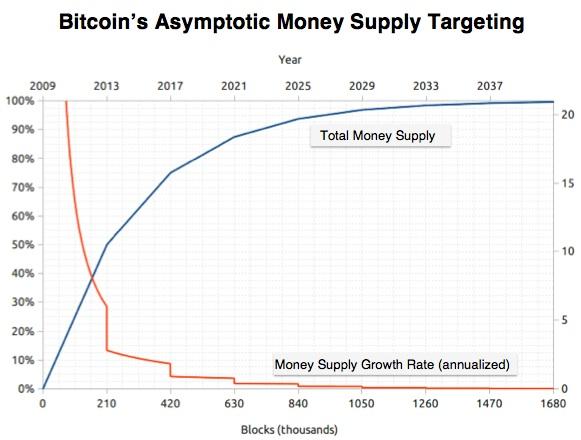 One reason for Halving’s idea, which is carried out periodically for four years. That there is no reduction in the value of Bitcoin from time to time.

Satoshi assumed to encourage sustainable growth, by choosing a logarithmic scale in setting Halving dates. This means that the last Bitcoin will not be released until 2140, even though 80 percent of Bitcoin supply has been mined in the first 10 years

Therefore Bitcoin miners still have more than a century of opportunity to get guaranteed rewards for their participation in the network.

Bitcoin halving for the first time was on 28 November 2012. If previously the miner’s reward was 50 BTC but after halving the reward was reduced to 25 BTC.

How does Bitcoin halving 2012 affect the market?

The impact on the market at the first halving event in the history of Bitcoin does not directly make the value of Bitcoin rise. This is because the Bitcoin market at that time had a completely different environment. Bitcoin is not yet popular, event halving has an overall impact that is ignored by the market and mining community.

However, the reward was cut from 50 BTC to 25 BTC which is a huge difference. The price of Bitcoin did not really rise until mid-2013 after the first halving event. Before halving the value of Bitcoin is $ 12.

After the first halving, the price increase did not happen immediately and it took several months. This shows that the 2012 halving event was not the main cause of the slight increase in prices in 2013.

The second bitcoin halving on July 9, 2016, at the time before halving the miner’s reward was 25 BTC and after halving was reduced to half to 12.5 BTC.

While the price before halving is $ 650 for one BTC, only after the first halving in 2012 to 2016 prices have gone up many times from $ 12 to $ 650. At that time Bitcoin was gaining popularity, and many people were talking about Bitcoin.

Impact on the market

Bitcoin halving 2016 is the second Bitcoin halving event. How it affects after halving is quite surprising, there is no substantial increase in the price of Bitcoin.

Hash rate will drop by 5 to 10 percent. There is almost no real change. In fact, the drop hash rate even becomes less than 1%. However, it is interesting to note that there is some price volatility seen before halving. The Bitcoin exchange rate has decreased by more than $ 30 so the price has dropped to $ 630 from $ 660. After halving, prices have stabilized at $ 650.

Impact on the market

Long before Halving Bitcoin date 2020 in May, many analysts were convinced that the value of optimistic Bitcoin could reach $ 10,000. But what happens in the market after Halving is not so big directly impacts the value of Bitcoin.

What happened was before halving the price of Bitcoin was in the range of US $ 8,525. But after Halving a few days after that, the price started to climb to the level of US $ 8,783.

When referring to the first and second halving to analyze. Indeed the price increase does not directly occur after halving. But requires time with the tendency of the value of Bitcoin to continue to climb.

Even now the price is still seen rising and reaching $ 9732. And if the demand for Bitcoin increases, while a decrease in the miner’s reward to only 6.25 BTC means that supply will decrease. And this can increase the value of BTC for some time to come.

A secret message before the Bitcoin halving date 2020

Bitcoin halving date 2020 occurs when the world is hit by a global crisis, where the pandemic coronavirus has caused a paralysis of the world economy. Many countries experience economic shocks due to lockdown policies that require their people to obey the government’s recommendations.

This message led Brian Kelly, author of The Bitcoin Big Bang, to CNCB, that when the US Central Bank undertook “quantitative easing” then Bitcoin did the opposite of “quantitative tightening”.

The negative side of halving bitcoin

The negative side of Bitcoin Halving is that many miners will stop their operations. Because the rewards they receive are diminishing. Especially individual miners. They can stop the machine because they think the reward they get is not commensurate with the electricity costs that spend.

Smaller rewards will make more miners lose money and move to other cryptocurrencies. With the reduction in the number of miners, this can affect the level of hashes on the Bitcoin network, which then affects the speed of user transactions.

Marco Streng, the co-founder of Genesis Mining, gave a price of $ 200 to produce one BTC on the first Halving. And the price was raised to around $ 400 after the second halving.

While large miners will continue to maintain operations despite lower revenues, the reason is that the costs incurred have not yet made a profit. Meanwhile, the number of inefficient small miners will decrease, because they do not get profit after the next Halving occurs.

The big miners even though they get a small revenue they hang their hopes on the rising price of Bitcoin in the future. Hope they can repeat the highest price of Bitcoin at the end of 2017.

The next Bitcoin halving countdown

Bitcoin halving date events are every four years, in every 210000 blocks so the next halving will occur around in 2024. And there is still more time for three more years to see the growth of Bitcoin and its value. 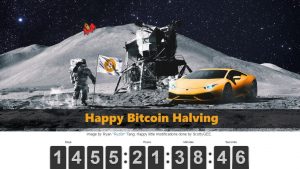 Bitcoin does have an advantage compared to fiat currencies because it is made in a limited amount like gold, while printed flat money represents a need that can trigger inflation.

The practice of printing flat money to provide loans to countries in need is also suspected of cheating because there is no gold backup to guarantee it. So central-bank consider printing the money without any effort to get it, but only printing money for free but getting interest from the borrower who they do hard work to be able to pay off the debt plus interest on the loan.

And this is where the power of Bitcoin is because it is made in limited quantities, and people who want to get it must do business by mining, or buying through an exchange so that inflation can be suppressed.

Bitcoin has no particular authority that has a monopoly on money which freely prints money no matter how much it wants.

Are you crypto trader?