In accounting science, we may have heard the terms amortization and depreciation. Amortization may seem similar to depreciation, but they are actually different.

Depreciation and amortization are both accounting processes that have a depreciation effect on asset values. However, both have different concepts.

Amortization is an accounting process that plays an important role. To be able to find out the condition and financial statements of a business.

Citing Investopedia, the definition of amortization is a process of paying off debt. With a certain period or period and is also done in stages.

The amortization payment procedure has a special calculation in which the installment rate or payment must be greater than the loan principal. And interest expense that must also be borne by the borrower.

So, the amortization value will gradually be paid off at each installment payment.

Another definition of amortization is a distribution of the amount or cost of capital in the form of an intangible asset over a certain period of time. Amortization will be effective as long as the asset is still usable.

Another explanation for amortization is an accounting process that is carried out by reducing the value of liabilities or costs. And intangible assets that are worked on slowly.

The deduction of the value of these intangible assets will be carried out according to their limited economic life through the method of periodically giving expenses to the income value.

This cost allocation on intangible assets focuses on reducing the value of the liability. Through the payment procedure on the loan principal at once with the interest.

So, it will be possible to know the number of installments that must be paid until the maturity date of the loan can be repaid.

Amortization serves as a reflection of the resale value of the intangible assets.

An example is when making a loan with a certain installment price, it will be known that the amortization value is as much as the number of installments that must be paid.

An amortization fund is an effort to raise funds or cash on a regular basis to be able to pay off amortization expenses in each period.

The goal is that the company will be able to pay bills from ongoing amortization costs.

Amortization is carried out to reflect the resale value of an asset. So, the selling value can be known and the company takes benefit from the amortization.

Amortization provides relief for long-term debt. Because each month the borrower will pay an amount of interest along with the principal amount of the loan.

You can imagine if you borrow in the short term with the same amount of interest, it will be very burdensome so that if the borrower is unable to pay it off. It could be because of the agreement, the assets will be confiscated.

Through amortization, your installment amount remains low, but periodically, you can pay off the loan and the principal until it is due for repayment.

If the loan is for homeownership credit, then slowly you will own your house when the last payment is fulfilled.

The amortization of the repayment period can be up to more than ten years, this gives a long time to find the money for repayment.

How amortization is calculated

In the amortization process, the borrower has to pay debt installments in the form of principal and interest.

Then at the end of the loan principal tenor will be the same as the principal installment paid. So that the loan balance is zero.

At the initial stage of the calculation, we must find the amount of amortization for the first month. To calculate amortization, it can be done using the following formula:

The borrower charges an interest rate of 6% with a tenure of 12 months, then the installment amount is calculated:

Next is to calculate the loan balance by reducing the principal value of the loan in the previous month by the number of principal installments.

In the loan amortization table, the borrower will pay the same amount every month. While the interest paid is lower and the principal repayment is higher, until repayment time, the final interest is only a few dollars.

Depreciation is defined as the allocation of depreciation expense to tangible assets during a certain period. Where a certain time period is the time span for the utilization of these assets.

Depreciation is calculated because the value of tangible assets often fluctuates in value both when purchased and when they are sold or no longer used.

The figure from the depreciation calculation will affect the financial statements. For example the effect on the value of a company’s taxable income.

How to calculated depreciation

The example above uses the straight-line method. Meanwhile, the weakness of this simplest method is the assumption that the economic usefulness of assets is the same every year.

Amortization and depreciation of asset value are related to one another. The two accounting terms are also related to several other things.

In terms of definition, amortization and depreciation are both related to changes in the value of the company’s assets.

Amortization and depreciation can also be attributed to the functions they have.

The function of amortization is a reflection of the value of the company’s assets when they are to be sold back.

Meanwhile, depreciation has a function so that companies can receive and maintain income in a certain month. So, functionally, amortization and depreciation are both useful in terms of changes in the value of the company’s assets in the future.

Amortization and depreciation are also related to the stages of implementation. Both are carried out by the company in the month the expenditure occurs.

In other words, amortization and depreciation are inseparable from the two.

To calculate loan amortization, you can use Excell 2019 to start by using certain tables and formulas that you can try yourself.

2. Fill the Principal, Tenure, and rate in the cell 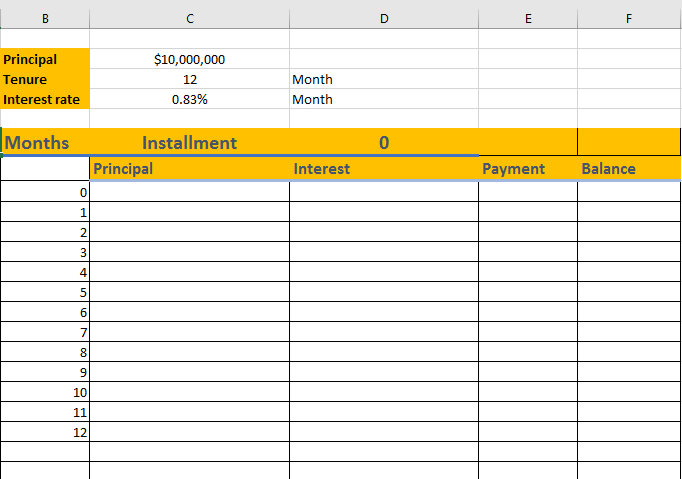 5. in the 0th month right below the Loan Balance.

Linking it to the principal of the loan so the value or amount of the Loan Balance in the 0th month is still the same as the Loan Principal.

The $ symbol has a function to locking the formula so as not to move rows and columns when we drag it down to the next month. -12. If you confuse about how to drag the formula, just copy and paste on the next cell and change cell B9 with B10 and the next based month’s Cell. 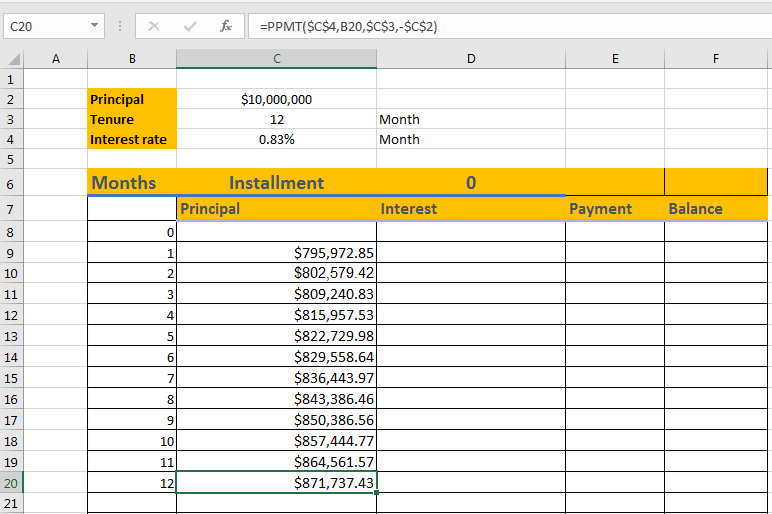 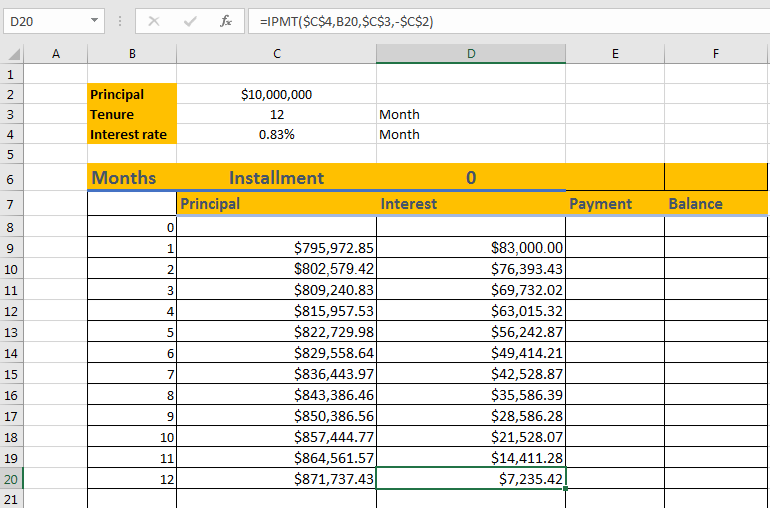 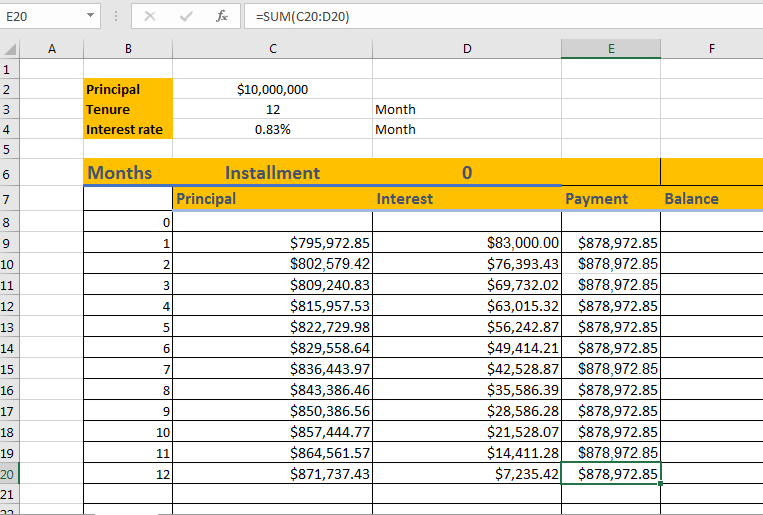 9. in the 1st month in the Loan Principal Balance, write the formula =(F8-C9) then drag it out until the 12th month. 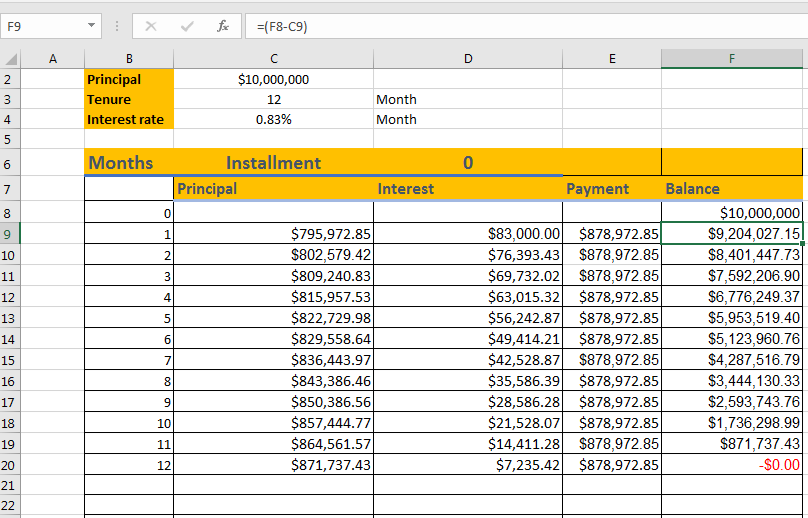 10. On the 22nd row under the Principal Installment column write the formula =SUM(C9:C20) 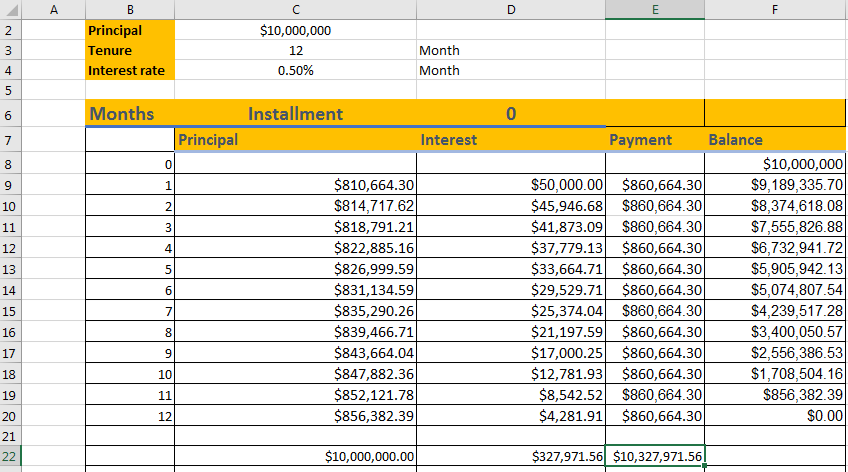 The table above has been completed and will make it easier for you to calculate the installment payment table for a 12-month tenor, with an interest of 0.83%. If you change the loan principal in column C2, the value will automatically change.

Of course, the excel amortization table can help you at least to find out the total installments that you have to pay off at the end of the due month.

You can modify the tenor to 24 months or 48 months, by adding a column until the last month that you want according to the loan term you choose.

Amortization analysis at the end of the loan period month’s 12th:

Final Thought for Amortization and depreciation

In a business, if a company amortizes expenses, then the amortization can help tie the cost of assets to the income it generates.

For personal finance, the amortization can provide an indication of the number of installments each month and the calculation of interest until the end of loan repayment. This will make it easier for your expenses by referring to your monthly income.

What are pestle analysis in business

How does whatsapp make money 2020

What are pestle analysis in business

What is microsoft mesh mixed reality?