Business Research
112
No Comments
Share Tweet Share Share Pin it
Bill Gates Has Predicted the Corona Virus Threat since five years ago, then now Bill Gates as target theory conspiracy. coronavirus pandemic. Bill Gates once warned about the dangers that arise other than war, is a contagious disease. In a speech, he said that. This warning was said by Gates in a discussion about the

Bill Gates once warned about the dangers that arise other than war, is a contagious disease.

In a speech, he said that.

This warning was said by Gates in a discussion about the epidemic, in April 2018.

His speech organized by the Massachusetts Medical Society and the New England Journal of Medicine.

The founder of Microsoft said that if the pandemic can occur.

The virus outbreak could kill more than 30 million people in six months.

These statistics come from the Institute for Disease Modeling which predicts how the world will deal with a virus outbreak in the next 10-15 years.

This threatening virus is said to most likely come from animals such as birds, chickens or pigs, etc.

Although originating from animals, this virus can mutate and attack humans.

The transmission which was originally only animal to humans can also develop into humans to humans.

In a YouTube video broadcast published in 2015, Bill Gates has warned about the lack of preparation of the existing system to deal with the threat of infectious diseases that can cause a pandemic.

He said that speech five years ago, and now the world is truly amid a coronavirus pandemic COVID-19.

Is this a coincidence or does he already know because there is a plan behind the spread of this coronavirus?

Regardless of the people who become conspiracies, they will accuse Gates of the Bill and Melinda Gates Foundation for making coronavirus a global pandemic.

This is after Gates, founder of Microsoft billionaire who turned into a philanthropist.

spent many second actions in his career initiating and supporting efforts to prevent and control infectious diseases through the Bill and Melinda Gates Foundation, which has funded several PHICOR teams.

Gates strongly encourages awareness about the possibility of a pandemic to prevent this possibility, as in this 2015 TED talk:

In that speech, Bill Gates warned about bioterrorists who attack not through weapons but attack through microbes.

But precisely what he said triggered a conspiracy theory that Gates had made this pandemic.

This conspiracy is like blaming someone who warned of the dangers of an infectious disease before the disease came.

Like when Gates posted a photo on Instagram that expressed his gratitude to health workers for their efforts to deal with coronaviruses in America and around the world. 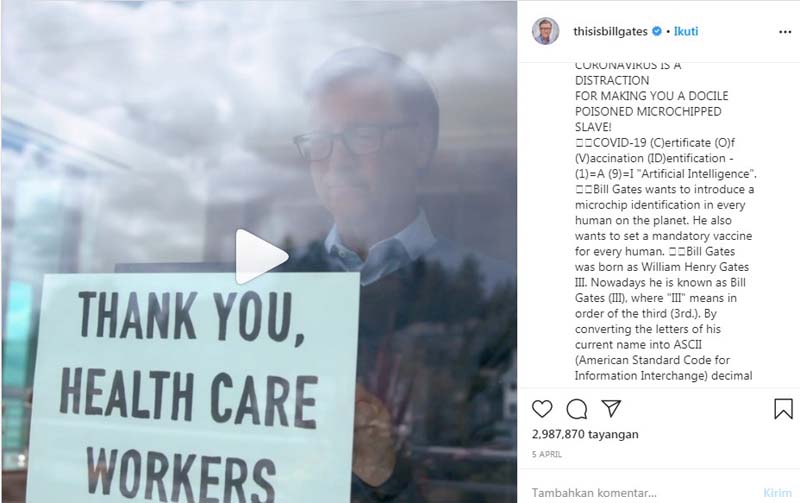 But some people made comments accusing Gates.

@thedorianyates wrote, “One day you will answer crime … if you want a population reduction why don’t you start with yourself and your children … who aren’t vaccinated”

There are various anti-vaccination messages and even suggestions that Gates wants to put a microchip on people to track it down.

Is it true that Bill Gates created COVID-19?

Is it true that the conspiracy accused Bill Gates of being one of the Illuminati members on another conspiracy agenda known as the New World Order?

Which existing system will be replaced by a new world order? where one way is to reduce the population of the world.?

If you read his statement below then there is an implied that he seemed to know this situation.

Gates said. “If you tell the world government that there are weapons that could kill 30 million people being built right now.there will be a sense of urgency about preparing for threats,”

And again he added about the lack of urgent preparation of biological threats. The world needs to prepare itself to face a pandemic as seriously,  how to deal with a pandemic.

In the first sentence above he said that a weapon being built could kill 30 million people, is this not an implied statement that bioterrorists were deliberately built for the agenda?

He further stated that to overcome that is to provide a vaccine.

Which contains a microchip inside which can track whether the person has received the vaccine or not.

This is the reason why conspiracy theories emerge giving negative statements to Gates.

The conspiracy theory states that the first step is to create chaos.

In this case, spreading the virus and the next step is to pretend to save or provide assistance in this case giving and selling vaccines throughout the world.

Gates funds WHO while Trump investigates WHO

However, the conspiracy does not yet have strong evidence to bring Bill Gates a suspect in spreading the virus.

He said stopping funding for the World Health Organization during the world health crisis was as dangerous as it sounded.

Their work slowed the spread of COVID-19 and if the work was stopped there was no other organization that could replace it.

The world needs @WHO now more than ever before.

Gates did not cite America in which Donald Trump gave a proposal to be suspended to the WHO until they completed the investigation to WHO.

This may indicate that Gates has ulterior motives for supporting WHO in the following tweet on April 15:

From the statement, it was very clear that he gave full support to the WHO.

And became one of the funding of the world health agency.

This accuses Bill Gates of collaborating with the WHO to create a vaccine to roll out his agenda.

Delivering vaccines with digital signatures throughout the world.

But Georges Benjamin, executive director of the American Public Health Association, strongly doubts that making a vaccine using a microchip is impossible.

He said that he was not aware of a microchip that was small enough to be injected in a vaccine.

Including how the epidemic began, how to prevent it, and how to respond to it.

From that statement, it will certainly give a different assessment, because he cares about various other infectious diseases.

Moreover, the Gates Foundation has provided $ 100 million to help with COVID-19 responses worldwide, as well as $ 5 million for Washington.

The COVID-19 pandemic is the answer to climate change

The impact of the COVID-19 pandemic does not always have bad consequences for the Earth.

The spread of the virus has indeed forced the business and economic sectors to be suspended.

But the virus has some positive environmental impacts in China and Venice, Italy seen to have significant climate change.

According to philanthropist Bill Gates, in the long run.

Efforts to control the COVID-19 pandemic will facilitate humanity in the fight against climate change.

However, not everyone has the same opinion as Gates regarding a global pandemic that will have a good impact on climate change.

As revealed by former senior director of the US National Security Council and special assistant to President Barack Obama. Jason Bordoff.

“COVID-19 can provide some short-term climate benefits by limiting energy use. Or even long-term benefits if economic stimulus is linked to climate goals. Or if people are accustomed to using telecommunications and thus using less oil in the future. But every climate benefit from the COVID-19 crisis is likely to pass quickly, “

According to Bordoff, climate change would be impossible if a pandemic could be controlled by humanity.

It means, “Pandemic is a reminder of how evil the problem of climate change is because it requires collective action, public understanding, and support.

As well as decarbonizing the energy mix while supporting economic growth and energy use throughout the world.”

Climate change is also a big threat to human life

A study published in the Lancet medical journal estimates that 500,000 adult deaths will be caused by climate change in the next 2050.

Many of the effects of COVID-19 are similar to the type of change needed.

Interestingly, many changes are needed to do cultural changes.

For example, governments in each country must expand bicycle lanes so that citizens avoid using public transportation. As well as experiments working from home. Of course, this policy can reduce emissions in the air

This has an impact on the solution to make great progress in addressing climate change.

It’s just that all countries will implement or ignore this climate change.

Bill Gates is one of the people with great wealth, and now he focuses as a philanthropist and founded the Bill and Melinda Gates Foundation.

But whether it is purely for charity, this is still a question whose answers have not been revealed, because a businessman, anything will become a business and make money.

Making a vaccine also requires huge funds, and if you have successfully found a vaccine, will it be given free of charge to the world or have to buy it at a high price?

If the vaccine is then given free, he is a true philanthropist, but if it is given at a high price, that is a false philanthropist. Like as Messiah but fake Messiah.